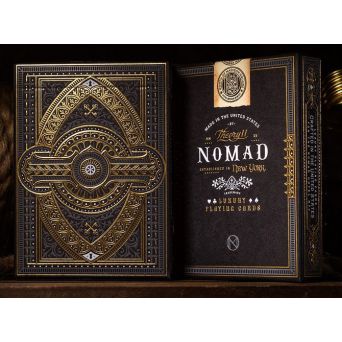 THE NOMAD HOTEL IN NYC

NoMad Playing Cards were produced in collaboration with The NoMad Hotel in New York City. In the 19th century, The NoMad District of New York was the meeting place of the era’s elite - from Oscar Wilde to Charles Dickens, Mark Twain to Nikola Tesla. Our vision was to create a deck of cards that would serve as a monument to The NoMad. The result is a timeless blend of beauty and elegance.﻿

SHIELDED IN GOLD AND BLACK FOIL

NoMad Playing Cards were inspired by actual architectural elements of The NoMad Hotel. From the fireplace in the lower level to the hotel’s signature phrase: “Made Nice". The back design, when rotated laterally, forms the shape of an eye - a gentle nod to the Latin phrase at the top and bottom of each card: "Beauty is in the eye of the beholder." Even the interior of the box has a pattern branded with The NoMad logo. No detail was left untouched.﻿

Designed by Chad Michael, the deck features a custom vintage design, reimagined Jokers, a gold embossed tuck case - and a stamp bearing the seal of The State of New York. Authentic distressed faces and realistic textures make the cards look like they’ve been passed down from generation to generation.﻿

Designed by Chad Michael in Dallas, Texas. Produced in collaboration with The NoMad Hotel in New York City. Made in America.﻿