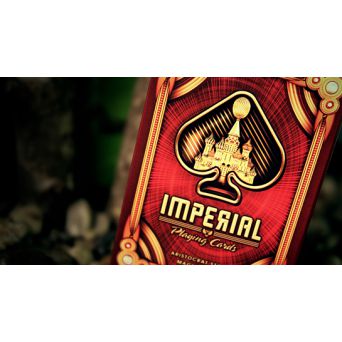 To differentiate the hierarchy of Cards, the JACKS are the "Warrior" Eggs within each suit. The QUEENS are simple, elegant and use light colors. The KINGS are the most decorative and ornate of the Court Eggs. Also, each of the KING Eggs contains a "Crown" at the top.﻿

The inspiration for the Imperial Deck derives from the beautiful Imperial Eggs created by the House of Fabergé from the late 1800's to early 1900's. With the goal to create my own unique Egg designs, I decided on different styles for each of the four suits found in a Deck of Playing Cards.

The DIAMOND Eggs all have a Nature/Fantasy/Elfish vibe. The CLUBS are inspired by Greek mosaics, colors and geometric shapes. The Russian Double-Headed Eagle is the focal point for the HEARTS and RED Back Eggs. They also draw inspiration from Ancient Rome. And lastly, the SPADES and BLACK Back Eggs all have a Baroque/Gothic look and feel.

The Imperial's Custom PIPS are made to resemble buttons made of Enamel and bordered with Gold. Each of the Aces contain a Gold "Surprise" element, similar to what a real Imperial Egg would have included within. The "Surprise" elements represent important Buildings (Spade, Club) and Symbols (Heart, Diamond) from Imperial Russia.﻿