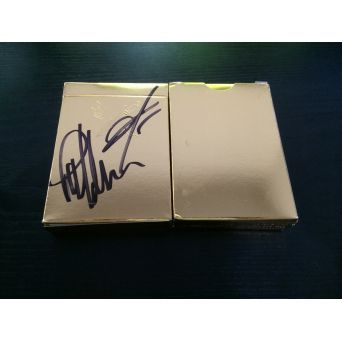 In 2012, Peter McKinnon and Daniel Madison collaborated on a video project in the dry lake-beds of Las Vegas, not quite realising at that time such a simple meeting of two creative minds would lead them to The KINGS deck.

Whenever Peter and Daniel work together, waves are made and a unique creative vessel is opened. The Kings deck is the ultimate representation of their joint creative forces.

Peter and Daniel spent a lot of time brainstorming, designing and creating their ideal deck of cards… Cards that would be fit for Kings.﻿

Peter and Daniel were meticulous and scrupulous with their requirements for the deck. They tested numerous stocks and finishes until they found and created a unique Kings finish and stock. The cards were traditionally cut to further advance gambling techniques, they are sturdy yet flexible enough for cardistry and sleight-of-hand.

They wanted a box that would look like a block of gold - direct from the Kings share - with a deck of cards perfectly designed to cater for both minimalistic beauty and a stunning design, but it didn’t stop there…

Peter and Daniel decided to make the Kings deck a secret weapon right out of the box… Readily stacked in Mnemonica AND fully marked so that not only would the performer be able to identify every singe card in the deck by the back alone, but also have the ability perform instant Mnemonica miracles. They added a double-backer and two unique and personalised jokers, and on top of that, they lost the ad-card and replaced it with an Angle Z Gaff card.

Two years in the making, Peter and Daniel returned to Las Vegas to celebrate their creation and film a heist that would represent their collaborative brilliance.

When you purchase the KINGS deck, you will gain instant access to a 30 minute download featuring Peter and Daniel, teaching several tricks with your new cards & the gaffs included. A PDF will also be sent with instructions on how to learn the markings on the back of the cards.

This is, the KINGS deck.﻿