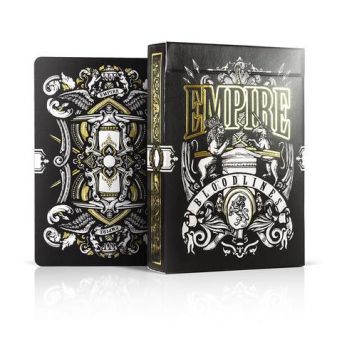 Drenched in silk black and teased with gold.Edges smooth as glass. The Limited Edition Empire Bloodlines are for those with love for the finer things. The uncommon man with uncommon tastes. He seeks to taste the rare and beautiful that lie behind doors off limits to most.﻿

He shifts gears, hugging the curves of the Amalfi coastline.On the leather dash, the decks gold shimmers in the light, as the evening sun pulses between silhouettes of passing palm trees. The Limited Edition Empire Bloodlines are the only choice for this evenings affair.﻿

The Mazerati of his playing card collection, nothing matches his distinguished taste for beauty and grandeur quite like these. Unexpected. Powerful. Refined, like him. Tonight, the Bloodlines will be the perfect accomplice.﻿

His league of success is not without it's luxuries.But you won’t find a man of his caliber who hasn't fought and bled for it. Luck is for the weak. Greatness runs within. With the Limited Edition Bloodlines at the table tonight, it’s just another chance to prove it.﻿

When you hold yourself to a higher standard, you deserve the finer things.

Made with imported European premium-grade paper, a Classic finish and a traditional cut for experts, the experienced card connoisseurs will instantly feel the superior handling fresh out of the box. If you dare to break the seal, that is.

Never to be re-printed, each luxurious limited edition comes with an individually numbered gold seal for collectors. 2000 decks were originally produced in 2014 and what's left is all there will ever be. Never been offered publicly since, they've been locked away in our private reserves. A forbidden, lost luxury. Until now.

With playing cards of this class, only few will have chance to call them their own.﻿