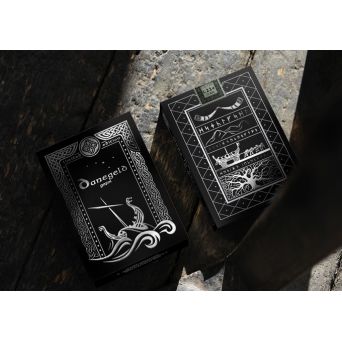 ► 2-way front and back designs

► Printed by NPCC with new and improved linen stock

The Danegeld (Danish tax/Dane tribute) was a tax raised to pay tribute to the Viking raiders to save a land from being ravaged. It was called the geld or gafol in eleventh-century sources. It was characteristic of royal policy in both England and Francia during the ninth through eleventh centuries, collected both as tributary, to buy off the attackers, and as stipendiary, to pay the defensive forces. Almost always paid in silver because the vikings used this metal as their main currency for trade.﻿

Yggdrasil is the iconic ash tree of Norse mythology. Serving as the axis mundi (world center) and a direct connection between deities and men. The roots play an equally important role in Norse cosmology of Gods, Giants and Men. Huginn and Muninn fly high in the distance, overlooking the realm of Gods.﻿

100% custom pips, fonts, values, courts and aces. The card backs are designed in the traditional 2-way layout, and inspired by the classic Bicycle composition. ﻿

The court cards feature legendary viking leaders of Scandinavia (800-1000 AD) and deities of Norse mythology, with Odin as the King of Spades. Illustrations are drawn in hand by professional illustrator Patrick Leis and lead artist Nicolai Aarøe. Courts are identical in the two decks.﻿

The two jokers of Midgard Playing Cards are represented by Odin's two ravens Huginn and Muninn and a runic index. Black ravens are common birds in Scandinavia and iconic for Norse culture and mythology. ﻿

The backs of Danegeld and Yggdrasil appear almost identical, while a closer look will reveal that symbolism and artwork is delicately diverse.They do, however, both feature Odin's two wolves Geri and Freki on the sides in a mirrored composition.﻿