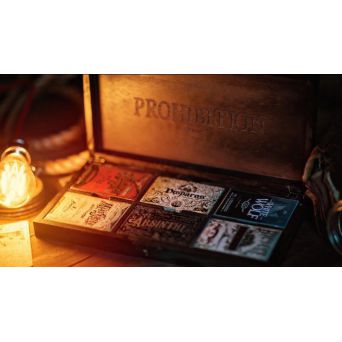 Atlantic City. 1920. The Volstead act has made it hard to find a drink in this town, unless you know where to find the local speakeasy. If you've got 2 bits and the password, you'll get in the door. Behind the bar you’ll find Rusty - he’s as quick with the drink as he is on the draw - but you won’t be hanging around long enough for either. You’re here to pick up a very special order. A nod and a wink is enough to make Rusty slide the unassuming wood box across the counter. The burnished brass latch keeping the lid secure and the contents hidden from prying eyes - but those in the know are aware you’ve just picked up six of the best. Six American favorites. Not the watered-down swill you get from the juice joints down the street. This is the best Prohibition has to offer. Premium and Original. Enjoy in Moderation.

Absinthe, the Green Fairy of spirits, has long been associated with the bohemian lifestyle, with famous drinkers including Picasso, Van Gogh, Hemingway, Oscar Wilde and Toulouse-Lautrec. These cards embody the allure of the emerald drink, the hallucinogenic haze, sugar crystals in the night - even the Ace of Spades is modelled after the filigree of the absinthe spoon. Heavily embossed, even the box appears to have had a few drinks. Be Enchanted by the Green Fairy.

Disparos - Spanish for 'shots', is how tequila should be consumed. Taking inspiration from the vaqueros and gunslingers of the Mexican old west, the tequila deck is a piece of history. The block printing design and false-edge border gives these cards a rustic feel, the kind you'd expect to find regularly used in the local cantina. With embossed sugar skulls, duelling pistols and custom everything, these are shots of Tequila you won't regret in the morning.

Rebellion Rum - a Pirate's first mate, comes straight from the stronghold of Tortuga. Tropical hibiscus flowers adorn the back of the cards while the faces maintain the nautical theme. The inside of the tuck is printed with a maritime map, while the Ace of Spades takes the form of a Parrot and its raised wings. Like all the Prohibition decks, Rebellion Rum is printed on the finest stock USPCC has available, with no expense spared in the production of these cards.

Moonshine - the spirit of the Appalachians, kept thousands of speakeasy's in business during the '20s, and no Prohibition set would be complete without this sweet, illegal corn liquor. The court cards feature some of history's most famous moonshiners, the box has some of the cleanest embossed printing we've ever seen and it's all rounded out by a fully custom seal.

WhiteWolf - Premium Vodka that lends itself to design as stark and crisp as the Russian Tundra. Lead designer Mike Clarke took a very different angle with this deck, giving it a modern, minimalist twist. Half-shaded pips, single-line drawing courts and a speckled paper overprint give a truly luxury feel to an otherwise austere composition. Although the brand WhiteWolf was created just for these cards, we truly believe that its magic should be bottled. Best enjoyed below zero.

52Proof - Whiskey is as American as apple pie. The giant oak tree on the front of the tuck box and seal is a symbol of the aging process for fine bourbon, as it's matured in charred oak barrels. From the Ace of Spades right around to the back design, this oak motif continues throughout the cards, whereas the Gold Foil stamping on the outside of the tuck and luxurious red satin-finished interior makes 52Proof one of the most gorgeous boxes we've ever produced.﻿