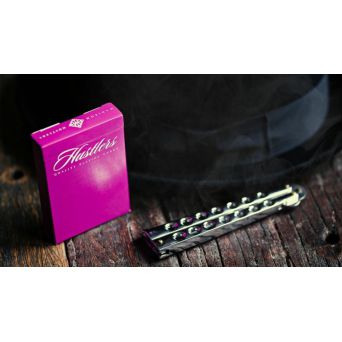 A NOTE FROM DANIEL MADISON

Purple and Limited-Edition Orange will be the last two decks ever created in the Madison Logo Series.

When faced with the challenge of making a new Madison deck I wanted to dare to be different and do something that would take everybody by surprise.

Minimalistic and monochrome are two words that have become synonymous with my image and style and I wanted to change that with the Madison Hustlers; I wanted to take a risk and create something very much on the outside of my comfort zone.

I chose two colors that had never been used before on playing cards; a purple that’s approaching pink and an orange as bright as I could find - two colors perfect for summertime madness.

Heavily inspired by the casinos of the 50’s and 60’s, I wanted to create something that wouldn’t look out of place in the original Ocean’s 11 film.

In line with the previous Madison decks, the design revolves around the M logo, which although appears four times in the design, you never see a complete logo.

I wanted something that would appeal to both gamblers and magicians - something that would have the benefits of an all over design whilst at the same time retain the ‘magicians-ally’ - borders. To do this, I only placed borders on the sides of the deck and bled the design to the top and bottom, and within these borders, I offered a one-way system by offsetting the left border by 1mm.

I created a new Ace of Spades that hosted only the M logo with no Spade and the Joker in this deck is a new favorite, which of course, has a special reveal hidden within.

This deck represents change and the confidence to dare to be different. I am Daniel Madison, and these are the Madison Hustlers.﻿